So for the past couple of months I’ve had a Sony Xperia Z2 tablet. Was I able to ditch my ipad for it? Read on to find out.

I’ve hammered on about the waterproof properties of the Z2, which seriously blew my mind (pictures and details here if you missed it) – if you’re anything like me, half your bath time is spent meticulously drying your hands so you can check a message on your phone or read the news on your tablet.

As for the general user experience, it’s really simple to set up and operate – even for me, who has never operated a Sony device before aside from the odd Playstation game. I’ve also never worked on Android (as opposed to IOS which is what I’m used to), which is what made me most nervous. I didn’t have any issues with the setup though, and everything feels very intuitive – most of the functions and shortcuts are in the first place I thought to look.

I downloaded a bunch of my most used apps and games, and I only had an issue with one game (I suspect it came from the developers’ side – image ratios were out). Everything else worked perfectly, and with the high quality display apps like Pinterest and Youtube work REALLY well – the Z2 has become my device of choice for watching videos. Also, Candy Crush is SO much more fun in all its bright glory (my other tablet is a couple of years old and it’s starting to show in the display department). 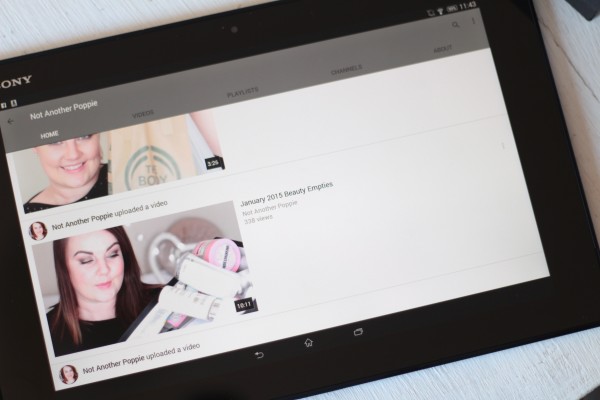 The battery life is also very decent, but one thing that I didn’t find great is how long it takes to charge. If I leave it switched on, a full charge takes somewhere between 4-5 hours. Which is fine if you plug it in before you go to bed, but not ideal if you only have an hour to top up your battery (an hour would give you about 20-25% battery life).

The actual device is super portable as it’s really light and very thin. I’ve yet to buy a cover for it so it hasn’t gone anywhere except when it travels along in a laptop bag, but I would have no issue chucking it into my handbag.

The bad news? It seems that I’m not going to be keeping my tablet. You see, the man seems to have pretty much staked claim on it. If he were a dog, I imagined he would have lifted his leg against the corner of the tablet.

He made a very good case about how his Playstation 4 and Playstation Vita (both from Sony) are compatible with the Z2, so I gave it to him to test for a couple of weeks. He did grumble about not being able to get the remote play to work with his other two Sony devices, so he couldn’t give me any feedback on that. But for the most part, the bloody thing is glued to his hand.

We can also access our wireless hard drive and either stream or download movies or tv shows we’ve stored on that, we finally figured out how to get Hulu and Netflix on it, and we stream DSTV Catchup as well.

He hasn’t given it back yet, but I do get turns to use it for bath purposes (and the occasional Candy Crush on his account, obvs). He’s been much more savvy with it than I have, but I’m just playing it cool and pretending to know about every new feature he shows me.

Would I replace my ipad with the Z2? I wish I could say yes, but I fear that I’m getting old and stuck in my ways, because it’s not because of any fault of the Sony tablet – there is really not one thing about it that isn’t simple and streamline, and I can’t fault it in any way.