When fellow blogger Ashleigh offered to mule some beauty booty over from the UK a couple of months ago I decided to keep things in the budget-friendly zone.

Just about everything I asked her to bring was very reasonably priced even with the very sad exchange rate (R18 for £1, anyone?), and I wanted to see if the grass really is greener on the other side – with regards to drugstore brands I read about the most, at least.

One of the brands that had come up very often in various news feeds is Barry M. The nail polishes are just about everywhere, and when I started browsing the Barry M section on Boots the Natural Glow Palette caught my eye. They launched a couple of months ago in the UK and the reviews looked good so I added it to my shopping list. 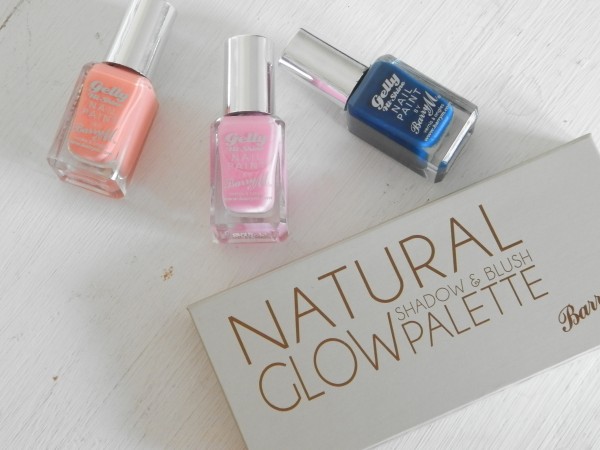 At first glance the palette is an amazing all-in-one – something I’d happily go on holiday with (Also; cardboard case. It’s lighter and virtually impossible to break). Six neutral-ish eyeshadow shades (including two mattes) and a peachy pink blush. Until I swatched them. Good grief, it’s inconsistent. I wasn’t expecting Chanel or Lauder quality, but the first three shades barely showed up even after I repeatedly applied them. The last three, on the other hand, showed up surprisingly well. The blush is pretty sheer and it’s a beautiful shade, but will only work for the palest girls.

The good news is that the shadows wear slightly better on the eyes than they swatch. The two matte shades are rubbish, but the shimmer shades are ok with the two darkest ones being decent. I might keep that fourth shade, but the rest I have no love for.

I was hoping the nail polish was going to redeem Barry M for me, but it turns out that’s not quite the case. I chose three shades from the Hi Shine Gelly range, and while I’m absolutely smitten with all three actual colours, my experience with the varnish has been that it goes on very streaky (on prepared nails, with base coat). The streaks are still somewhat visible after two coats and top coat, but it will pass for decent at a glance. I really do love the shades I chose (smitten with Papaya) so I’m going to give it another shot, hope it goes better then!

Have you tried any of these? Love them or not? I’m not terribly heartbroken, because even at the horrific exchange rate that palette was only R120 (£6.49) and the nail polishes were £3.99 each, but I got them on a 2 for 1 deal. They were all bought from Boots.